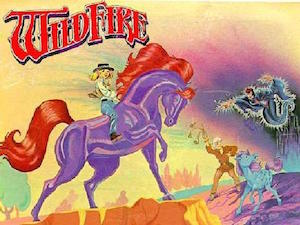 Wildfire was a 1986 cartoon by Hanna-Barbera, airing on CBS.
Advertisement:

In the magical land of Dar-Shan, the beloved Queen Sarana dies under mysterious circumstances. Wildfire (John Vernon), a magical talking horse, escapes with the infant Princess Sara to Montana. When she turns 13, he comes back for her and they attempt to save Dar-Shan from the evil Lady Diabolyn, Queen Sarana's stepsister, and her Spectres. Sara herself has no magical abilities, and usually succeeds by her wits and with the (sometimes dubious) assistance of a sorcerer, his apprentice, and an orphaned colt.