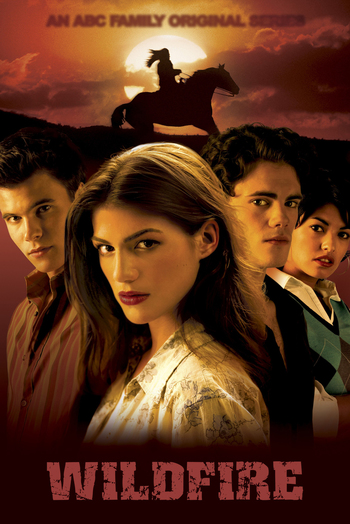 Wildfire was an ABC Family television series that ran from 2005 to 2009.

Centered on the racing stable of Raintree in Northern California (and their next-door neighbors, the powerful, wealthy Davis Racing Farm), Wildfire tells the story of Kris Furillo (Genevieve Padalecki), a troubled teen who, while in a juvenile detention center, learns to ride horses through an outreach program and develops a special bond with the Thoroughbred stallion Wildfire. After she is released, Pablo Betart (Greg Serano), head trainer at Raintree, offers her a job as a ranch hand. Raintree is owned by Jean Ritter (Nana Visitor), the stubborn, compassionate single mother in charge of running the farm. Helping her are sons Matt (Micah Alberti) and Todd (Andrew Hoeft), both of whom are extremely equine savvy. Matt is best friends with Ken Davis Jr. (known as Junior) (Ryan Sypek) and his younger sister Dani (Nicole Tubiola).

The show spans four years and details the troubles and travails of a struggling family racing farm. Running themes are Matt and Junior's constant competition over Kris, Raintree's monetary troubles and Dani's efforts to get out from under her father's thumb, as well as Wildfire's rehabilitation and transformation into a champion racehorse.

Although never strong in the ratings, Wildfire maintained a steady and loyal audience for its four-year run, mostly in the form of horse-crazy girls. The first three seasons are available on DVD, and all four can be found on YouTube or could until LionsgateTV decided to make all the videos private. The full series is available for free on Hulu

Unrelated to the 1986 animated series, which also features an unusual horse.

This Show Provides Examples of: