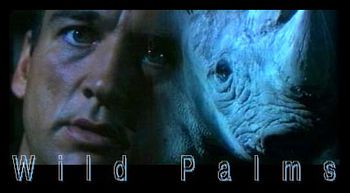 Your reality is their business.
What is that climbing up the stair?
It's not a boar, it's not a bear
And on its head it has a horn
As odd as any unicorn....
Advertisement:

Set in 2007, Harry Wyckoff (Belushi) has got it all: A successful career as a patent attorney, a beautiful wife, a teenage son starting a TV career, and a little daughter who is still too shy to speak. But at night, he is haunted by nightmares of palm trees and rhinoceroses. Accepting a call for help from his former girlfriend to find her kidnapped son, Harry is pulled into a web of intrigue surrounding the charismatic Senator Kreutzer, TV Channel 3, a strange religion called Synthiotics and old rival secret societies called The Friends and The Fathers.

Wild Palms demonstrated an astoundingly sensible projection of future trends, including the rise of retro music as well as believable fashion. Notably, one episode was directed by Kathryn Bigelow.