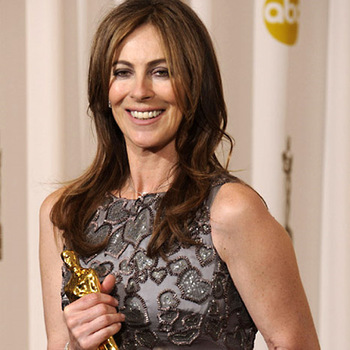 "I think violence in a cinematic context can be, if handled in a certain way, very seductive."
"If there's specific resistance to women making movies, I just choose to ignore that as an obstacle for two reasons: I can't change my gender, and I refuse to stop making movies."
Advertisement:

Kathryn Ann Bigelow (born November 27, 1951) is an American film director, known for her adrenaline-soaked action movies and also for being the first woman to win the Academy Award for Best Director (for The Hurt Locker).

All of her movies tend to focus on characters who knowingly and willingly place themselves in harm's way in order to accomplish something that has to be done and at times seem to be addicted to the thrill of the chase.

From 1989 to 1991, she was married to James Cameron, who co-wrote and produced her film Strange Days. Some were afraid this would cause awkwardness during the 2009 Oscar race, when her film The Hurt Locker and his film Avatar were considered the frontrunners for Best Picture, but there was no bad blood between them at all, with Cameron praising The Hurt Locker for being "this generation's Platoon" and even encouraging Academy voters to vote for Bigelow as Best Director.

Her film Zero Dark Thirty, about the hunt to assassinate Osama bin Laden, was nominated for Best Picture, but also attracted strong controversy.

Tropes applying to her and her work: