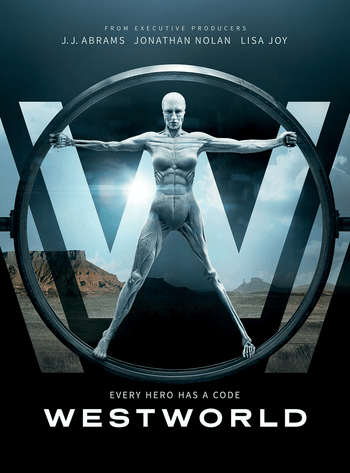 "These violent delights have violent ends."
"I used to think this place was all about pandering to your baser instincts. Now I understand. It doesn't cater to your lowest self, it reveals your deepest self. It shows you who you really are."
— William
Advertisement:

Westworld is a 2016 Science Fiction/western television series airing on HBO, based on the 1973 film of the same name by Michael Crichton. The series comes from Warner Bros. Television, rather than being an in-house production.

20 Minutes into the Future is a Theme Park Version of The Wild West known as Westworld; a place wherein every human appetite, no matter how noble or depraved, can be indulged without consequence. Here, wealthy human "guests" can live out all their desires or fantasies with the super-realistic robotic "Hosts", no matter how immoral or illegal they may be.

One of the Hosts, Dolores Abernathy (Evan Rachel Wood), has her looped story broken when she stumbles upon her father having a fit, and a dark chapter in the park begins as secrets begin to be unveiled.

In general this series provides examples of the following tropes: