Literature / The Winds of War/War and Remembrance 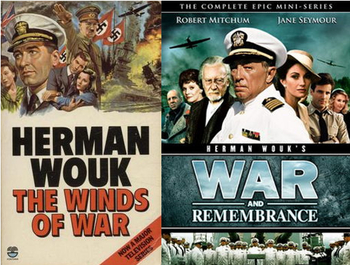 "The beginning of the end of War lies in Remembrance."
— Herman Wouk
Advertisement:

A historical epic of World War II written by Herman Wouk (The Caine Mutiny) and published in two volumes, The Winds of War (1971) and War and Remembrance (1978). Both novels follow two American families, the Henrys (a U.S. Navy family) and the Jastrows (a Jewish family) and their friends around the world during the war, with The Winds of War covering the period from the late 1930s up through the bombing of Pearl Harbor, and War and Remembrance covering the rest of the war. In effect, the novels comprise a "sight-seeing" tour, in which we are shown the war from as many perspectives as the author can manage, including excerpts from a pro-German history of the war by a fictional German general, Armin Von Roon. All the fictional characters regularly meet up with real historical figures from the war, intertwining fiction with fact. It has been called a World War II version of War and Peace; and both volumes were adapted into TV miniseries in the '80s.

Not to be confused with the Web Comic The War of Winds.