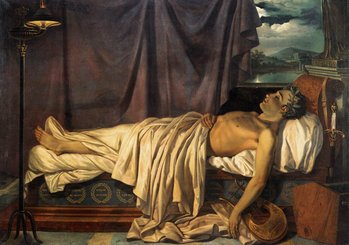 George Gordon Byron, 6th Baron Byron (22 January 1788 – 19 April 1824), was a Romantic poet, womaniser, and revolutionary. He gave his name to the Byronic Hero trope, by writing about Byronic heroes and being one in real life.

His childhood was fertile ground for what he became. His father, Army Captain John "Mad Jack" Byron, of a junior line of moderately old gentry familynote the male-line ancestors of the 1st Baron Byron—Lord Byron's great-great-great uncle—had been knights at least as far back as his great-great-grandfather in the 15th century. married his mother, Catherine Gordon (heiress to the Scottish estate of Gight, in Aberdeenshire), in 1785. By the time George was born in 1788, "Mad Jack" had squandered most of Catherine's money, and she took her son to Aberdeen to eke out an existence on the remaining crumbs and a small trust fund; "Mad Jack" would die of tuberculosis in 1791. When Byron's great-uncle, the 5th Baron Byron, died childless, George, then 10 years old, inherited the title and the family seat at Newstead Abbey—which was a wreck that his mother preferred to rent out to junior gentry. Not that she spent the rent money well—she alternately spoiled George and herself, could be very stubborn, and was generally lacking in judgment.

The women in his life included:

This is an incomplete list. In addition, Byron was bisexual, and had homosexual lovers as a young man. He is a good real life example of a Gentleman Snarker.

Byron took part in the Greek War of Independence (1821-1830). He died, after being repeatedly bled with dirty surgical instruments, of a fever contracted while in Messolonghi in Greece, in 1824 at the age of 36.

He had a limp and wore special shoes due to being born with an abnormal right foot, and this played into his self-image as deformed. He was still an avid athlete, with boxing and swimming being two of his better known sports.

Works by Lord Byron on the wiki:

Has featured in the following works:

Tropes from the works of Lord Byron: