Webcomic / The Thrilling Adventures of Lovelace and Babbage 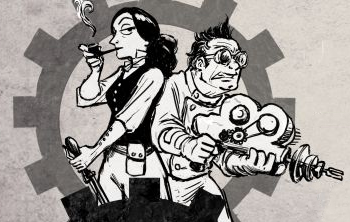 In Real Life, Charles Babbage was an eccentric genius and mathematician who designed the world's first computers and wrote the first computer programs. His mentee Ada, Countess of Lovelace, was the first to speculate upon computers as not mere calculation machines, but material representations of analysis. Sadly, Babbage's computers were never built and Lovelace died when she was 36.

As it turns out, Real Life sucks, so what actually happened was that Babbage and Lovelace built a Difference Engine that takes up an entire building and use it to fight crime. That is, if you define crime as street music and poetry.

) is written by Sydney Padua, who wrote the first installment in celebration of Ada Lovelace Day.

The Thrilling Adventures of Lovelace and Babbage provides examples of: