Literature / The Stress of Her Regard 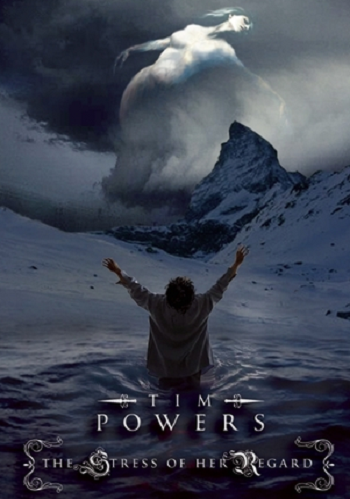 A 1989 historical fantasy novel by Tim Powers, set in early nineteenth century Europe. The premise reworks several historically collected quotations and poems from authors in that era into a meta-Cosmic Horror Story, exploring and explaining the personal anguish inherent to artists through the lens of vampires and ancient conspiracies. As such, Powers gets to show off his knowledge of the minutiae of that era by writing an adventure spanning the entire European continent.
Advertisement:

Earth is secretly home to at least three intelligent species, of which only humans were active in historical times — until someone woke one of them up 800 years before the story opens, seeking to become immortal in exchange for providing a linkage between the two species which would allow them to become active again. This species is referred to in-story as the nephelim — a reference to the ancient Christian myths of the Nephilim that once walked the earth in the days before the Flood. (The third species is represented by the mountains themselves; they are expected to inherit the Earth in the far future.)

The nephelim can offer immortality and poetic inspiration, but at a price: they are vampires, and while they do not directly harm their human hosts, they are jealous "spouses" and will kill their hosts' families. Several English Romantic poets encountered over the course of the story have such "spouses" and have lost close family members to them, but cannot bear to break free at the cost of no longer being able to create great poetry. Those who try to break free are subject to pursuit.

The story's protagonist is an English obstetrician named Crawford, who is about to marry for the second time (his first, unhappy marriage ended with his wife's death in a fire) to a respectable young Englishwoman named Julia. During a drunken escapade the night before marrying Julia, Crawford puts a wedding ring on the finger of a statue; unfortunately, the statue was a nephelim seeking a human host that would let her cross the English channel in pursuit of her previous host, Percy Bysshe Shelley. The nephelim kills Julia on their wedding night, forcing him to flee to the Continent. He is pursued by her twin sister, Josephine, who has... issues. While on the run, he involves himself with several similarly affected persons-of-importance, gets roped into both sides of a conspiracy-cum-revolutionary-movement, and slowly uncovers the ties that bind mankind and the nephelim.

This work features the following as characters: