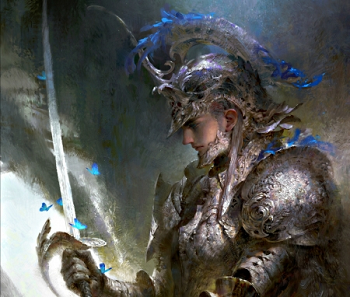 Silver was considered a mystical element in folklore, and thus its properties become reality in fiction. The metal can do many things, from channel magic, to stopping evil (including warding off or harming vampires and werewolves), making magic mirrors, to turning water into a Healing Potion.

The myth of silver's mystical properties goes deep into human history. As a noble metal akin to gold, this is often attributed to something along the lines of silver's Incorruptible Pure Pureness. In fact, it's because of something people noticed a very long time ago: if you put water in a silver pitcher, it takes a lot longer for it to get unhealthily scummy. Silver has antimicrobial properties

that make it quite useful in medicine. In ancient and medieval alchemy silver was also the metal with an affinity corresponding to the moon, so many of the mystical properties of the moon also became associated with the metal (which would certainly explain its usefulness against werewolves). Unlike in post-Medieval works, many pre-Christian pagan mythologies also associated it with the Sun, and many solar deities are described with silver objects (like Saulė

's silver thread, Apollo's silver bow and arrows or Amaterasu's silver mirror). Though ancient alchemists couldn't know it, silver does have a unique property among the elements — it exists in a naturally excited form — i.e. it has a single electron that exists in a higher energy level, leaving a gap in the shell immediately "below" it.

Silver is almost always considered to be on the good end of magic (and items formed of it may also be Made of Good). Some works can make it evil or used for evil when Light Is Not Good.

This trope is one possible reason vampires traditionally have no reflections and don't show up on film. Old-timey mirrors used silver backing to achieve reflection, and black and white film used silver nitrates to capture the image (plus some old camera models included mirrors in the light capture mechanism); since vampires are unholy, their light is not picked up by divine silver. Of course, silver nitrates were phased out of film even before film itself was made obsolete by digital cameras, and modern mirrors are usually backed by much cheaper aluminium, but the association between vampirism and lack of image reproduction still lingers.

Even beyond mirrors and bullets, this can overlap with Supernatural Repellent.

A Winter Royal Lady might prefer silver due to it fitting in with that trope's color scheme.

If Gold–Silver–Copper Standard involves all those metal having magic qualities, expect gold to be even more powerful, while silver still has its own powers. The two of them used together can also be a sign of divinity.

A Super-Trope to Silver Bullet.

See also Mithril, a silver-like Fantasy Metal (which is also called "(Moria) silver"). If this trope is true in a work that also has mithril, then the mithril might take it Up to Eleven.