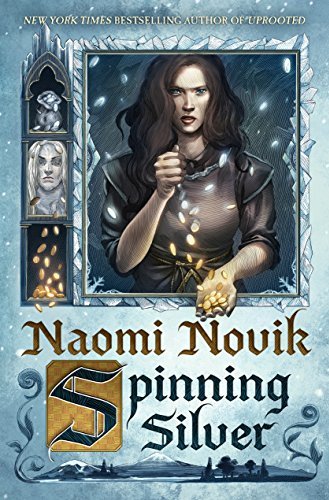 A Spiritual Successor to author Naomi Novik's previous novel, Uprooted. While the two books don't share a setting, their tones and themes overlap significantly, with this book being very loosely based on the stories of Rumpelstiltskin, Bluebeard, and Hansel and Gretel.

Miryem is the daughter and granddaughter of moneylenders, but her father is not a very good one. Free to lend and reluctant to collect, he has left his family on the edge of poverty - until Miryem intercedes. Hardening her heart, she sets out to retrieve what is owed, and soon gains a reputation for being able to turn silver into gold.

One night Miryem boasts of this near the woods, and this draws the attention from none other than the King of the Staryk, a race of ice demons who kill any who hunt their pure white animals, plunder gold from the people, and freeze any and all who wander too close to the woods. He gives Miryem a challenge: three times over, turn his silver into gold. If she fails, her life is forfeit. If she succeeds, she shall become his queen. It's a seemingly impossible task, and one that alerts her to the true scope of his plans for his world and hers.

While Miryem struggles to earn the gold she needs to avoid the Staryk's wrath, her neighbor, Wanda, fights to find a way to deal with her violent, drunken father and his clear intent to marry her off for a bride price. Elsewhere, the noblewoman Irina is betrothed to the handsome king Mirnatius and learns that he may be harboring a dark secret.