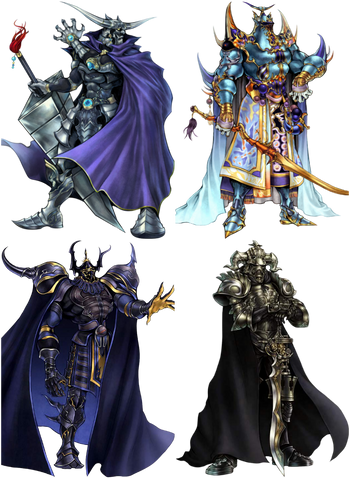 Certainly, the dry cleaner will feel oppressed. note  Clockwise from top right: Exdeath, Gabranth, Golbez, Garland
"For too long, Empress Qa-Len has been a thorn in my iron-plated side!"
—Lord Ferrok, Battalion Wars 2
Advertisement:

When the phrase "tinpot dictator" is literal.

Evil Overlords have the tendency to fight in full plate armor, even in settings where that doesn't actually make sense. Their armor usually has plenty of Spikes of Villainy and is Color-Coded for Your Convenience in black. Usually, it conceals their face to make them appear more mysterious and menacing. Often upgraded to Powered Armor or a full-body prosthesis/life support system in more advanced settings.

In fantasy settings, this is the standard look for the Black Knight. However, that doesn't always mean that an overlord of this type is solely a physical fighter. He might also be an Evil Sorcerer that made the wise choice of donning armor to offset his main weakness. Besides, they are almost always Large and in Charge so it's normal to see them as evil Magic Knights. And sometimes, the wearer might be secretly a girl.

Spikes of Villainy and a Badass Cape are commonly used accessories.

See also Animated Armor. Contrast with Chrome Champion. Not to be confused with Master Computer, where the tyrant is made of tin.

Attempted to take over Paris and continue his ancestor's legacy, all while clad in a dark suit of armor.

Attempted to take over Paris and continue his ancestor's legacy, all while clad in a dark suit of armor.