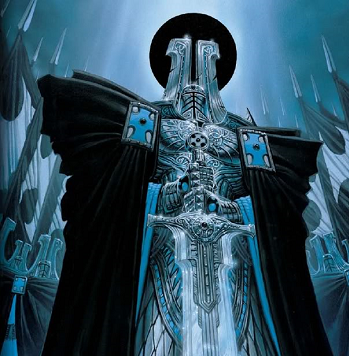 It deals with the Villain Protagonist / Anti-Hero Wismerhill, a half-elf from an unknown father allying with Evil Sorcerer Haazheel Thorn in order to overthrow the Holy Roman Empire-esque empire of Lhynn.

Turns out that Wismerhill is the lynchpin of a Gambit Pileup involving prophecies, gods, demons, elemental forces, and immortal archmages and that his choices will ultimately decide the fate of his entire world. And with so many different clashing agendas, few things are as they seem, and fewer people can be trusted...

Volume 14 is the final album of the first arc. The French version was released on 21st of November 2008. Subsequent volumes have been released, concerning Wismerhill as the leader of a dozen-odd Fantasy Counterpart Cultures that escaped the destruction of the old world.

Two spinoff prequel series were made: Methraton, which reveals more of the title character's past and goals against a backdrop of the setting's distant past, and Les Arcanes de la Lune Noire, recounts the origin story of Wismerhill's companions and what their lives were before the main series' events; so far, one-shots covering Ghorghor Bey, Pile-ou-Face, Parsifal and Greldinard have been released. A prequel detailing Wismerhill's origins has also been released. Finally, the comic has been adapted into a strategy video game.

While the comic was originally only available in France and several other European markets, Dargaud is translating the volumes into English as of 2017.