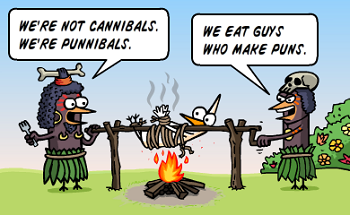 Well, you're not gonna have me over for dinner! [....] Wait, why are you guys looking at me like that?
Captain: Listen, chaps... There's still a chance. I'm done for; I've got a gammy leg and I've going fast. I'll never get through. But some of you might. So... you'd better eat me.
First mate: Eat you, sir?
Thompson: Eugh, with a gammy leg?!
Captain: ...You needn't eat the leg, Thompson, there's plenty of good meat! Look at that arm!
Monty Python's Flying Circus, "Lifeboat Sketch"

Cannibalism is often played for dark comedy. Cannibalism is gross, disturbing, and strongly taboo in many cultures, but less likely to get a Dude, Not Funny! reaction than more common forms of violence. Because cannibalism is both taboo and outlandish, it's common Crosses the Line Twice fodder. And food is funny. Compare Eat the Dog.

Black Comedy Cannibalism does not need to explicitly depict the act of eating people, and in fact, often it doesn't. It can be just as funny when the actual cannibalism is implied or offstage, and the humor comes from the incongruity of juxtaposing the horrors of cannibalism and murder with the mundanity of cooking and menu planning. Groan-worthy cannibalism puns are also a distinct possibility. Meat-O-Vision may occur if a character considers cannibalism because they're starving.

A common variant is the gag where the characters are captured by a Cannibal Tribe and placed in a pot to be Stewed Alive, accompanied with lots of wisecracking and/or corny byplay, and possibly a lot of puns.

If someone unintentionally becomes a Humanitarian, may overlap with I Ate WHAT?!.

Compare Let's Meet the Meat, when the meal is not only sentient but wants to be eaten.

Apparently the "only way" Conrad could get away with murder is to subsist on his victim's body in smoothy form for weeks before he tries leaving to Cuba.

Apparently the "only way" Conrad could get away with murder is to subsist on his victim's body in smoothy form for weeks before he tries leaving to Cuba.