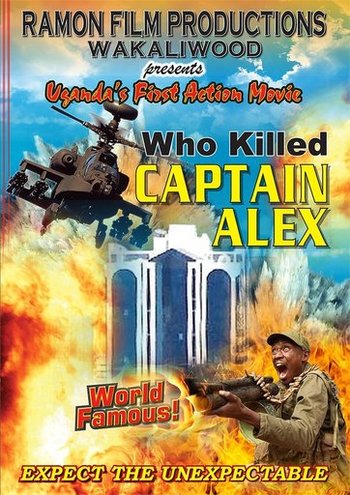 Who Killed Captain Alex? is an independent, low budget Ugandan action movie, produced by Ramon Film Productions, and is billed as "Uganda's first action movie". The film was made for over a year and a half in early 2010 on a budget of less than $85 US Dollars (215,000 Ugandan shillings; or about $256 at Uganda's 2010 private consumption PPP conversion factor), which was raised via crowdfunding websites and donations. It was mostly filmed in the Wakaliga slum of the Ugandan capital of Kampala for much of its production, and a majority of the props seen were homemade. Much of its popularity overseas is owed to its energetic YouTube trailers, low quality but exciting action/gunfight sequences, and authentic action styling and camera work.

The plot begins with Captain Alex, a highly-skilled Ugandan Special Forces (USF) officer and a celebrated national hero, being ordered by the President of Uganda to take his platoon of commandos to the jungle to carry out a deep raid on a base that is home to the deadly Tiger Mafia gang, described as a large gang that rules Kampala and the suburbs around the city with an iron fist, now on the run due to several defeats at the hands of the USF. After stealthily sneaking into the base, taking out a few guards, and directly assaulting the base (interrupting a drug deal that the gang was conducting and getting the USF into a deadly and long gunfight with multiple Tiger Mafia goons), the USF commandos manage to capture the brother of the gang's leader Richard and escape unharmed.

The distraught Richard (after learning of his brother's capture by the USF on national TV), with the help of his double agent/spy on the inside of the USF command structure, retaliates with a massive assault on the USF base that results in the death of Captain Alex (it is disputed who killed him, however) and the USF falling into disarray for quite a while. Now it is up to Bruce U, a mixed martial arts master and the dead captain's brother, to get revenge on the Tiger Mafia and bring Richard to justice before he, his Tiger Force goons, and his squadron of attack helicopters put a plan into motion to destroy Uganda's cities and bring down Uganda's government for good.

), a video joker — a commentator/translator who will occasionally add their own input, crack jokes, or just shout out random words. The full film was released on Youtube

A sequel was actually filmed, titled Tebaatusasula ("Those Who Were Screwed Over"), but the hard drives containing the footage were wiped in a power outage, leaving the trailer as the only evidence of the film's existence.

The movie has gathered this reputation due to the budget of only $200 making the VFX naturally awful, combined with the commentary by a Video Joker but has also been loved as a cult film due to the amount of effort involved.

Example of:
So Bad, It's Good

The movie has gathered this reputation due to the budget of only $200 making the VFX naturally awful, combined with the commentary by a Video Joker but has also been loved as a cult film due to the amount of effort involved.