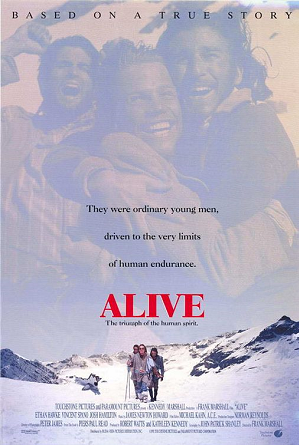 "Pass me another hunk of co-pilot."
Advertisement:

The film is an adaptation of a non-fiction book: Alive: The Story of the Andes Survivors (1974) by Piers Paul Read. It describes in detail the events of Uruguayan Air Force Flight 571 and the story of its survivors. In summary, the plane contained 5 crew members and 40 passengers. The passengers were the members of the "Old Christians Club", a rugby team, along with various family members and associates. The flight took off from their native Montevideo, Uruguay for Santiago, Chile. But on October 13 (a Friday), 1972 the airplane crashed on a then-unnamed peak of the Andes (later called Glacier of Tears). 12 people died in the crash, including the pilots. The other 33 were left stranded in an uninhabited area at the borders of Chile and Argentina.

The survivors had to survive on their own while waiting for help. Several suffering from injuries, all suffering from a complete lack of medical supplies and their meager food supplies. Over the following months several would die from injuries, disease or avalanches. Those surviving eventually resorted to cannibalism, eating the bodies of their dead comrades. They attempted a number of expeditions but failed to contact anyone, prior to returning to the remains of the plane. On December 20, two of them (Roberto Canessa and Fernando Parrado) managed to establish contact with a Chilean huaso (local equivalent of the gaucho and cowboy). He brought them help. By December 23, the final 16 survivors were rescued and brought to civilization. They had survived 72 days in the wild.

The film closely follows the events of the book, though it notably changes the focus. Piers Read paid close attention to the harshness of the living condition and the sociological aspects of organizing a group in the wild, while giving a calm and detached view of the extreme measures they had to take to survive, cannibalism included. Marshall was more interested in the Heroic Spirit of the people trying to survive. Cannibalism is portrayed but its brutal details are largely left out.