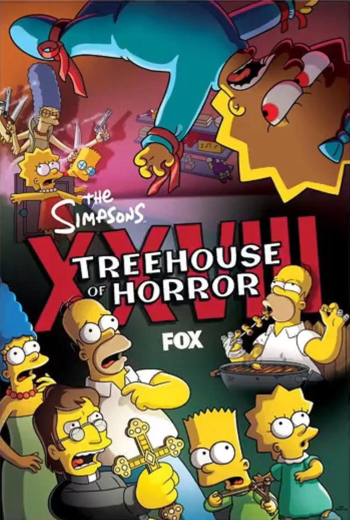 The 28th instalment in the Treehouse of Horror series.

The opening segment sees the whole family as living candies (save for Lisa, who's an apple) who manage to avoid being eaten through Halloween night and put on a shelf next to an uneaten chocolate Easter Bunny, who the family go on to devour.

Homer accidentally orders a relic containing an evil demon off the Internet, which he places in Maggie's room. Maggie ends up being possessed by it and causes some trouble until an exorcist is called in to expel him from Maggie's body. He succeeds, but then the demon ends up taking residence inside Bart's body, only to find that the boy's soul is blacker than anything he's ever seen...

Lisa feels rejected by her family and ends up finding a door to another world where she meets her other family who have buttons for eyes. She initially rejects having buttons put on her eyes to join them, but relents after Homer wrecks her saxophone. Bart soon follows after her along with Maggie and Marge. Homer follows after all the family disappear and ends up accidentally killing his other self and the other self Bart. However, he works out a peaceful solution for the rest of the other world self to live with the family.

Marge and the kids go to visit their sisters while Homer stays home under the pretense of having to work. Once they're gone, he goes on an epic eating spree... until there's no food left (save some vegetables) until he finds a lone hot dog. While trying to cook it, he cuts off his finger and it falls on the bbq grill. Curious, he eats it and finds he tastes good, so much so that he rejects any other food given to him and continues to cut off and eat more of his body parts. When Marge finds out, she's appalled and leaves him. Ultimately, in the end, Homer offers up his remaining body to be cooked then eaten at a few fast-food chains, which makes the whole family somewhat proud that he at least made others happy.