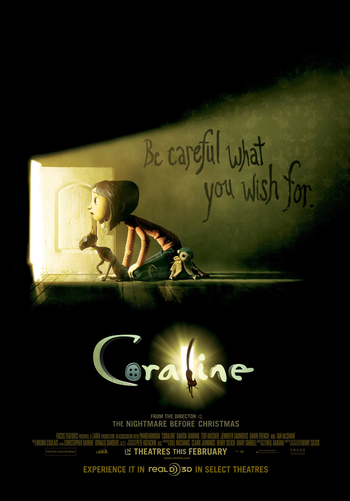 Trust us, sometimes Light Is Not Good when you go Down the Rabbit Hole.
"You could stay here forever, if you want to. There's just one tiny little thing we need to do..."
— Other Mother
Advertisement:

The Film of the Book of Coraline, animated by Laika in their solo feature debut, and adapted and directed by Henry Selick (of The Nightmare Before Christmas and James and the Giant Peach fame). It was released on February 6, 2009, and was the first Stop Motion movie filmed with a 3-D camera (however, the 3-D showings were only in limited locations for a few weeks).

Coraline Jones (Dakota Fanning) moves from Pontiac, Michigan with her mother and father to the Pink Palace Apartments, an old house subdivided into three residences, in Ashland, Oregon. With her parents frantically working on a gardening catalog in order to make ends meet, and thus not paying much attention to her, Coraline begins to feel neglected. While exploring the house, she discovers a small door with a brick wall behind it. That night, she is awoken by a mouse in her room, which she chases to the small door. She opens it, but instead of a brick wall, she finds a long, glowing passage, leading to another world.

At the other end, Coraline finds herself in the "Other World", which is inhabited by her "Other Mother" (Teri Hatcher) and "Other Father", (John Hodgman) idealized doubles of her parents (except for the black buttons sewn into their eyes) who pay close attention to Coraline and spoil her with treats. After enjoying a home-cooked meal made by the Other Mother, she spends the night in the Other World and awakens back in her bed in the real world.

Coraline continues to go to the Other World at night and is entertained by the various delights present, including idealized versions of her neighbors, a beautiful garden built in her image, and delicious food. Coraline begins to prefer the Other World to her real one, finding that her Other Parents give her all the love and attention she lacks at home. Eventually, the Other Mother offers to let Coraline stay in their world forever, on one condition:

She has to have buttons sewn into her eyes.

When she refuses, things quickly take a dark turn as the Other Mother attempts to force Coraline to stay in her world. Coraline must rely on her bravery and wits to get back home.

The film contains the following examples:

In the movie, at the end of his performance, all of the mice (rats in disguise) hop into his costume. The second time around, Bobinsky is revealed to be only made of rats. It's unclear whether he was all rats the whole time, or whether he was eaten by the rats and they assumed his body.

Example of:
The Worm That Walks

In the movie, at the end of his performance, all of the mice (rats in disguise) hop into his costume. The second time around, Bobinsky is revealed to be only made of rats. It's unclear whether he was all rats the whole time, or whether he was eaten by the rats and they assumed his body.