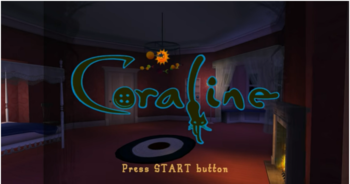 A 2009 3D Action-Adventure licensed game by Papaya Studios and D3 Publisher, based on the 2009 animated film of the book of the same name and released in close proximity.

The overall setup of the game is generally what you expect. It's all about the titular heroines' weird and mind-screwy adventures within the Pink Palace as well as the Other World. Explore the real world and the mysterious Other World, meet the many quirky and memorable movie characters... and avoid getting buttons sewn over your eyes by Other Mother.

Players naturally play as Coraline Jones herself as she interacts with characters and locations on her game adventure. Along the way she will play different missions, minigames and solve puzzles. Succeeding in the minigames rewards the player with buttons (yeah), that works as currency in the in-game shop, which unlocks different prizes like concept art, photos, movie clips, and outfits that Coraline wears in the movie. Some of the voice cast from the movie return to reprise their roles in the game.

The Nintendo DS version of the game is a different structure from its console counterpart. It's a more straightforward Adventure game mixed with a Visual Novel. The DS game was designed by Japanese developer Art Co. Ltd, and has an Animesque artstyle.