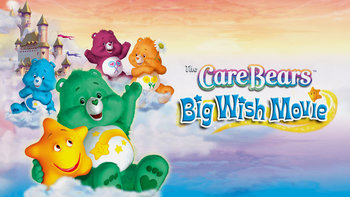 Care Bears: Big Wish Movie is a 3D animated Care Bears film, the sequel to Care Bears: Journey to Joke-A-Lot, and the sixth and last one to be produced by Nelvana. It was released Direct to Video on October 18, 2005. It was also the second and last production in the 2002 incarnation before the Adventures in Care-a-lot redesign.

This film follows Wish Bear (Stephanie Beard) and her pet star, Twinkers, who have noticed that recently their friends haven't liked their wishes. Wish Bear wishes that there were some bears around who really, really, really like wishing.

She gets her wish in the form of three Canon Foreigners, Too-Loud Bear, Me Bear, and Messy Bear. Upon their arrival, Wish Bear will quickly learn why wishes aren't always the best solution...

This movie is available to watch on Tubi.

"What's wrong with a trope, something nice for a page?"

We never do see Uncle Wish-a-Lot...

We never do see Uncle Wish-a-Lot...