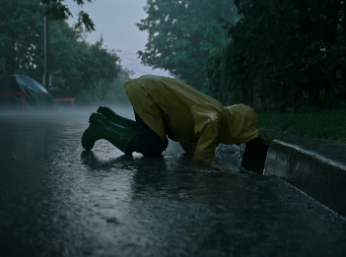 Raincoats are getting to be common item in the horror genre, to the point where you can almost expect a work to be a horror, or horror elements to suddenly enter a work, by the sight of a significant character wearing a raincoat.

Compare In the Hood, Badass Longcoat, Conspicuous Trenchcoat, Trenchcoat Brigade, any of which this could possibly overlap. Contrast Exposed to the Elements, The Coats Are Off.

This item is available for purchase in the TropeCo™ catalog!