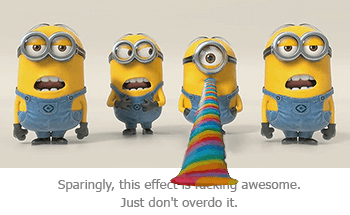 Kermit: So it's going to be a swell demonstration, and at no time will we be stooping to any cheap 3D tricks.
Fozzie: Did someone say "cheap 3D tricks"? [Blows noisemaker at camera]
— Muppet*Vision 3D
Advertisement:

A trope exclusive to 3D movies. When making a film specifically for a 3D release, many filmmakers like to play with the 3D effects by making people and objects appear to reach out from the screen at the audience. More often than not it's simply done for its own sake to show off the 3D effects, but this can also be used to invoke a sense of danger, such as throwing sharp objects or driving cars right at the camera. The effect is unfortunately lost, however, when the film is eventually released on DVD in 2D, leaving viewers wondering why these characters enjoy shoving stuff into the camera so much.

Depending on one's personal preference toward 3D movies, it can be seen as either using the medium to its full potential, or just adding a gimmick onto another gimmick.