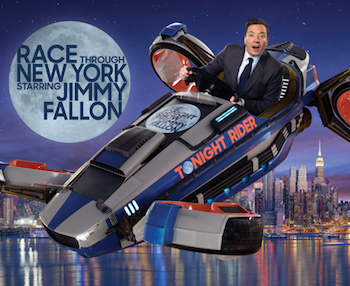 Take the show for a ride!
"In a few minutes, we're gonna go head-to-head in a high-speed, action-packed race through New York City! You're gonna see it all; you're gonna see Times Square! The Statue of Liberty! The Empire State Building!"
— Jimmy Fallon
Advertisement:

The attraction's plot is centered around the "celebrity race" segment of the show, but taken Up to Eleven, as in this case, Jimmy takes the riders on a thrilling race through New York City while along the way coming across various characters from the show, including most notably a King Kong-sized Hashtag the Panda that only makes the race more wackier when he tosses Jimmy and the guests into outer space.

A unique feature of the ride is that it's the first Universal attraction to make use of "virtual queueing", where instead of waiting in a line for the ride, guests are instead given a color-coded ticket and wait around until their color is called; after which they are led directly to the ride's pre-show. The attraction has two waiting room areas, the first being a large exhibit chronicling the history of The Tonight Show and all of its hosts, and the second being an interactive area that features games, meet-and-greets, and small performances.

The ride was officially announced by Jimmy himself on October 27, 2015 during an episode of The Tonight Show. It replaced Twister...Ride it Out, which closed a mere few days later on November 2. After over a year of development, the ride was opened on April 6, 2017. In celebration, The Tonight Show was taped inside one of the park's soundstages from April 3-6.