Film / The Adventures of Sharkboy and Lavagirl 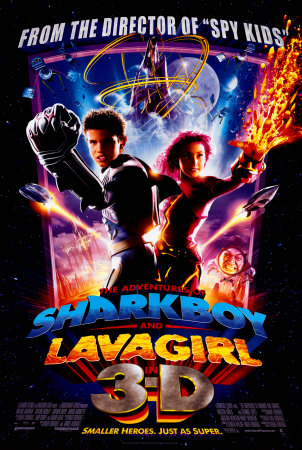 The Adventures of Sharkboy and Lavagirl in 3-D, also known as Sharkboy and Lavagirl, is a 2005 action/adventure/fantasy film by Robert Rodriguez, the writer, producer, and director of Spy Kids, and uses the same anaglyph 3D technology used in Spy Kids 3-D: Game Over. The film stars Cayden Boyd, Taylor Lautner, Taylor Dooley, and George Lopez. Many of the concepts and much of the story were conceived by Rodriguez's kids.

Daydreamy Max, ridiculed by his classmates, conjures up his perfect dreamworld: the Planet Drool. But he learns that his dream is more powerful than even he suspects when his favorite dream superheroes, Sharkboy and Lavagirl, materialize on Earth asking for his help. An alien intelligence is interfering with his dream utopia, and darkness threatens his beloved Planet Drool. On their adventures there, Max encounters dream versions of his classmates and teachers who both help and hinder his quest. Is it true, as Sharkboy and Lavagirl say, that only Max, the most powerful dreamer, can stop it?

that Alternate Universe versions of Sharkboy and Lavagirl would appear in his upcoming superhero film We Can Be Heroes (2020), grown up and with a daughter. The film was released on Netflix on Christmas Day of the same year.

Max: He ruined my trope page!!!
Linus: I did NOT! Mr. Electric, report him to the mods and have him BANNED!

HE RUINED MY DREAM JOURNAL

I DID NOT! MR. ELECTRIC SEND HIM TO THE PRINCIPAL'S OFFICE AND HAVE HIM E X P E L L E D!

HE RUINED MY DREAM JOURNAL

I DID NOT! MR. ELECTRIC SEND HIM TO THE PRINCIPAL'S OFFICE AND HAVE HIM E X P E L L E D!