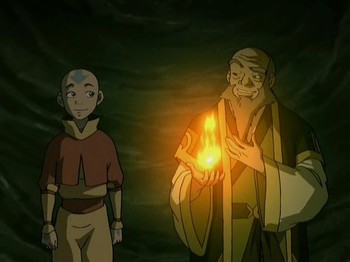 "You have light and peace inside of you. If you let it out, you can change the world around you."
Advertisement:

Fire is energetic. It burns hot. So giving people with fire-based abilities an equally fiery temperament acts as a kind of shorthand or shortcut, the same as giving them red hair or clothes. And then there's this trope.

This is one example of a Power Stereotype Flip (of which this is a Sub-Trope), giving characters with fiery powers (or lots of firepower — see Kill It with Fire, Mad Bomber and Throw Down the Bomblet) a more serene, stoic, composed, wise, or just plain nice personality that contrasts with the destructive power of fire. It's often justified In-Universe by explaining that they need to maintain their cool to keep their chosen element from getting out of control. It can be equally justified that, as Real Life fire is not a toy, it is one area where the normal choleric personality actually has the fire-forged patience (heh heh) to keep their cool.

Note that this differs from a character who is merely hiding their inner fire under a veneer of Tranquil Fury — these slow-burning characters also have a less restrained or outright sadistic personality (though the latter is sometimes still present as a "true self", a darker half or even a Superpowered Evil Side which sometimes slips through). And despite being at odds with the more expected, passionate, Hot-Blooded portrayal of other firestarters, this can still be considered a Personality Power; the calm personality can represent the fire of hearth and hospitality, with which bonfires and Sacred Flames may be symbolically linked, or the light of industry, even while still dropping hints at the threat fire can still pose if left unchecked.

Particularly common with characters who harness The Power of the Sun rather than harsher earthly (or hellish) flames. Compare Genius Bruiser for another character archetype which contrasts with their usual portrayal, and Making a Splash, for characters who wield the element this personality is more commonly associated with. Contrast Pyromaniac and Burning with Anger.