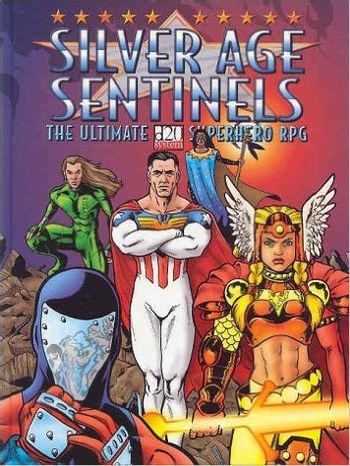 Silver Age Sentinels (or SAS for short) is a superhero Tabletop RPG published by the Canadian company Guardians Of Order (who also published the Big Eyes, Small Mouth –BESM- Anime-based RPG) in the year 2000. As the title indicates, the game focuses on the more noble vision of superheroes from the Silver Age Of Comics (although the game can be used for other variations, even the Darker and Edgier sort).
Advertisement:

The game’s official setting is Empire City-which is actually New York City, renamed to indicate that this is an Alternate Universe (although for the most part the historical events are the same as in the real world). The city’s famous Empire State Building was given to the world’s premiere superhero team, The Guard, as their Headquarters. Another major difference is the existence of Thule, an island nation raised from the sea by a supervillain that has become a minor economical world power.

Some of the main characters seem to be the Alternate Company Equivalent (and in a few cases the Captain Ersatz) of existing comic book characters, but still manage to have a flavor of their own. There were also several more original characters, however.

The Guard’s members are:

The Guard's major enemies are The White Rooks, an alliance of their greatest foes, who usually work alone. Their members are:

Other interesting characters include:

And several more. All are fully described in the main book.

The game uses a modified version of the Tri-Stat System used by Big Eyes, Small Mouth; the company was experimenting with several variations of the rules at the time, including some modules that offered D20 system conversions. It’s similar to GURPS but with only three main attributes (Body, Mind and Soul), though there are plenty of customization options.

A few supplements were produced for the game. The most notable of these was Reality Storm, a rare example of an official crossover between gaming companies where The Guard must join forces with The Champions to save both their universes from destruction. It included full conversion rules between SAS and the Hero System.

Sadly, Guardians of Order dissolved in the early 2000s, and the game’s license passed over to White Wolf, which hasn’t done much with it since then. However in September 2020, Dyskami Publishing announced a Second Edition of the game

under the new title Absolute Power in 2021, with the official setting moving forward 20 years in the timeline.

Can you balance superhuman gifts with humility, compassion, and hope? Do you have what it takes to resist the ever-present lure of Absolute Power?