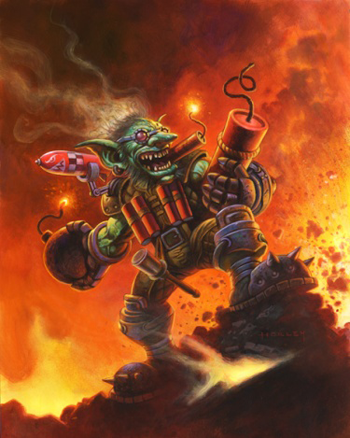 Sometimes you'll encounter someone who just seems to have the perfect personality to go along with their job, like a real-life work-related version of Personality Powers. For example, maybe an old-time watchmaker would have a very careful, analytical mind that paid very close attention to detail. What could be better for someone who has to very carefully use, assemble, and repair something made of hundreds of tiny springs and gears?

Then sometimes people will take this too far. To use the example above, perhaps our watchmaker is a coldhearted person who cannot stand other human beings and is incapable of basic human interaction because everyone else is too messy and emotional rather than clean, precise and easily understandable like the clocks and watches he works with. Which makes him a jerk with issues, but no big deal, right?

So what happens when you take that level of obsession and neurosis and give it to someone whose job is creating and using explosives? You wind up with a recipe for disaster. Take someone who has no friends and cannot interact with others, has some Freudian Excuse or a terrorist cause (or, more likely, no cause at all) or is just plain old Ax-Crazy, give him a Weapon of Choice that kills people Deader Than Dead (and he usually seems to have no problem getting his hands on the ingredients for creating more bombsnote As CSI's Grissom once said, "The dirty little secret about bombs is how easy they are to make.".), and you have a classic stock villain. (Although despite the status as a stock villain, they are often a chilling one, because of seemingly how easily this could be Truth in Television).

See also Bomb-Throwing Anarchists, Having a Blast, Nuke 'em, and Why Am I Ticking? Compare Demolitions Expert, a (usually) less psycho and more professional kind of character who is also very good with bombs, charges, and detonators; and Throw Down the Bomblet for grenades and other smaller explosives as a Weapon of Choice.

A schizophrenic pyromaniac, Trashcan Man zeros in on anything he can blow up following the apocalypse and - though still hampered by hearing voices - rejoices wildly with every explosion.

A schizophrenic pyromaniac, Trashcan Man zeros in on anything he can blow up following the apocalypse and - though still hampered by hearing voices - rejoices wildly with every explosion.