Recap / Doctor Who S25 E1 "Remembrance of the Daleks" 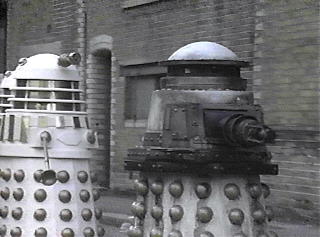 "I think I might have miscalculated".
"Nobody’s done that before or since. I think that’s going to go on my gravestone, actually. I beat up a Dalek with a baseball bat! My absolute claim to fame, and I was very proud of that moment!"
— Sophie Aldred

The one where a Dalek finally manages to go up some stairs.

Also the one with the legendary debut of the SPECIAL WEAPONS DALEK.

And, of course, the home of the original Moment of Awesome, where Ace took a super-powered baseball bat to a Dalek and gave it the beating of a lifetime, where most people would have run for their lives. And let's not even start with the rocket launcher. That's a body count of two to the girl from Perivale and zero to the Daleks.

Written by Ben Aaronovitch, who went on to write the Rivers of London series (along with some more Doctor Who for Virgin and later adapt some of it for Big Finish). This four-episode serial first aired from October 5—26, 1988.

Despite being aired in the show's 25th anniversary year and featuring many links to Doctor Who's very first episode, "An Unearthly Child", this is not the "official" 25th anniversary special. That was "Silver Nemesis", the first part of which aired on the actual anniversary. Nevertheless, many consider this serial to be the true anniversary story, featuring as it does both homages and continuity links to the first episode, some cryptic-but-major revelations about the Doctor himself, and the return of his greatest enemies.

Advertisement:
The Seventh Doctor and Ace arrive at Coal Hill School, perhaps a month after the First Doctor and company left during the very first story. It doesn't take long before they're mixed up in trouble of the Xenophobic Salt Shaker kind — two separate factions, the Renegades (Grey) and Imperials (White), who are the respective opponents and followers of the Dalek Emperor, wage war on each other for possession of the Hand of Omega, a Time Lord superweapon hidden here by the First Doctor, explaining why he was on Earth in the first place. And unfortunately for both groups, the Doctor has laid a trap for them; he just has to make the right conditions to spring it and ensure that Group Captain Gilmore and his men don't get diced in the crossfire. Two Daleks, (un)fortunately?, do end up diced in the crossfire — both at Ace's hand.

There's a lot of excitement that mostly involves running back and forth between the school and I.M. Foreman's junkyard. Professor Rachel Jensen and her assistant Allison Williams, scientific advisors to the Intrusion Countermeasures Group, spend a lot of time rolling their eyes at Gilmore and holding things for the Doctor while he does the actual science. One of Gilmore's men, Mike, is revealed to be The Mole for a businessman named Ratcliffe, who is working for the Renegade Daleks in the hopes of establishing a fascist regime in the UK. Ace, who was sweet on Mike, is devastated, and Ratcliffe and Mike are exterminated in short order.

At one point a Special Weapons Dalek, which is just a cannon mounted on a Dalek casing, shows up and obliterates a bunch of Renegades. After the Imperials capture the Hand from the Renegades, the Doctor confronts the Emperor Dalek... who turns out to be Davros. This is only surprising if you haven't watched the previous Dalek serial, which has him in charge of the Imperials. The Doctor tricks Davros into using the Hand to destroy Skaro and his own spaceship, literally talks the last Renegade Dalek to death, and calls it a day — he also takes the mickey out of Davros by using rice pudding!

Advertisement:
Wrapping up a story arc that stretched all the way back to "Destiny of the Daleks" in 1979, this is notable for being the final Dalek (and Davros) story of the Classic series, and the first story to introduce the idea of the Seventh Doctor as a more manipulative, proactive figure who plans ahead and goes looking for trouble. He also implies that he has some sort of mysterious past as one of the founders of Time Lord society, which is hinted at further in later stories. In fandom, this became known by the rather grandiloquent name of the "Cartmel Masterplan", though the man himself will tell you it was no such thing (he wanted to introduce questions about the Doctor's past, but he never intended to answer them. It was mainly just out of desire to add back more mystery into the character.)

The New Adventures books would take the idea and run with it, creating an elaborate mythology about Gallifrey and "the Other", but it all starts here. Over 20 years after the serial's first broadcast, Gilmore, Rachel and Allison received their own Big Finish spin-off, Counter Measures.

After wiping out the Imperial Daleks and most of the Renegade Daleks, the Doctor finishes the job by confronting the sole survivor, the Renegade Supreme Dalek, and taunting it about its lack of purpose as the last of the universe's supposed master race. Unable to contact anyone, the Supreme Dalek realizes that the Doctor is telling the truth and self-destructs in anguish. Note: this clip has been edited for conciseness.

After wiping out the Imperial Daleks and most of the Renegade Daleks, the Doctor finishes the job by confronting the sole survivor, the Renegade Supreme Dalek, and taunting it about its lack of purpose as the last of the universe's supposed master race. Unable to contact anyone, the Supreme Dalek realizes that the Doctor is telling the truth and self-destructs in anguish. Note: this clip has been edited for conciseness.