Recap / Doctor Who S21 E4 "Resurrection of the Daleks" 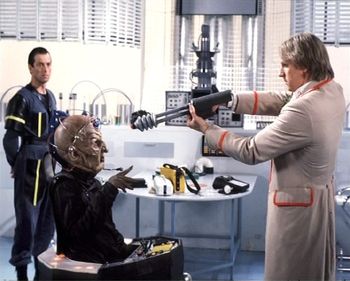 "And with this compact fluorescent bulb, Davros, I shall kill you."
So, they have returned to their creator. Like an errant child, they have come home once more, but this time they will not abuse me. This time, I shall take my rightful place as their Supreme Being, and under my control, the Daleks shall once more become triumphant!
—Davros
Advertisement:

The one where a Dalek gets shoved out a window.

London, circa 1984. A tramp watches several oddly-dressed people attempt to escape from a random warehouse only to be gunned down by British cops wielding modern (for 1984) submachine guns. The tramp is then gunned down himself, and the cops pull out a remote and make the bodies vanish in a glow of red light. However, one man was able to hide...

On the TARDIS, the Doctor and our companions are right where we left them, shaking around and clinging to the TARDIS as the Doctor exposits that they're being dragged along a time corridor. The TARDIS lands on the exact same street that the massacre just occurred on.

One of those cops, Lytton, transports himself aboard a spaceship. He's working with people who work for the Daleks, wearing Dalek-themed helmets. Their objective is to invade a space prison that holds Davros, creator of the Daleks, and liberate him.

Meandering around the streets of London, the Doctor and companions run into that lone survivor: a terrified, stuttering man named Stien. The Doctor recruits Stien into helping his party search for the right warehouse which has the time corridor in it. However, before they can go much further, the Doctor and crew stumble across an army bomb disposal squad, who've been called in to dispose of several things that are supposedly unexploded bombs. Turlough stumbles into the time corridor — winding up on the alien ship. (To his credit, he decides to hide rather than be captured in seconds.) The rest of the crew are updated soon enough, as the time corridor activates again... revealing a Dalek! It certainly would be fantastic to have a companion who is a robot and probably couldn't die easily, wouldn't it? The bomb squad shoot at the Dalek, but since it's Immune to Bullets, it kills several of the squad's men before the Doctor advises them to focus their fire on its eyestalk, blinding it. In the resulting struggle, he throws the Dalek out a third-story window. Tegan, for her part, is hit by a ricochetting bullet and is out of action for almost the rest of this serial.

Back at the space prison station, a few of the crew, led by Dr. Styles and Lt. Mercer, are still alive, and they're planning to re-take the station. By activating the self-destruct system and blowing it all up. Meanwhile, Lytton and Davros have a discussion where Davros complains about the Doctor for a time before being told why he's needed: the Daleks' enemies, the Movellans, made an anti-Dalek virus, and Davros is needed to make a cure. One typically loud Davros rant about the Daleks later, Lytton has vowed to help.

Back on Earth, the Doctor and the bomb squad drag in the remains of that fallen Dalek — but are assaulted by the Kaled mutant that piloted the unit. After nearly shooting a cat, the Doctor grabs a gun and pumps the blobby mutant full of lead. Repeatedly. The Doctor takes Stien with him into the TARDIS and they go inspect the other end of the time corridor. Once there, Stien declares that he's an agent for the Daleks! The Doctor is taken into custody. Turlough continues to evade capture as he joins up with the few remaining guards of the space prison and vows to help them blow things up. Back on Earth, more people die as those policemen kill off parts of the bomb squad.

Dragged into a special room and Strapped to an Operating Table with widgets attached to his head, the Doctor questions the Daleks as to why they need him. It turns out the Daleks want to clone an evil version of the Doctor and his companions, send them off the Gallifrey and then have them wipe out the leadership of the Time Lords. The Doctor does not take this well. Stien begins the process of cloning the Doctor's memories while the Doctor tries his best to screw with the Dalek programming on the poor guy. Flashes of all his previous companions and regenerations run through the Doctor's mind ... except Leela, due to a production oversight.

Turlough and the remaining guards attempt to set off the self-destruction device, only to have most of the guards die. Quickly. And on Earth, the Daleks capture the entire bomb squad and Tegan.

Luckily for everyone, the Doctor's meddling begins to break down Stien's programming and delays the process just long enough for Turlough to pop in to save the Doctor (and Tegan, who stumbled into the time corridor and is now there). Stien is allowed to tag along as the Doctor and Turlough attempt to stop the Daleks. However, the Doctor has a moral crisis and decides to go kill Davros. So he takes off with the guards and Stien — abandoning Tegan and Turlough in a pre-programmed TARDIS that will whisk them off to the Earth.

The Doctor confronts Davros, and the two of them engage in a philosophocal debate at gunpoint. The Doctor is fascinated to find out that Davros wants to make Daleks with emotions, because them being purely logical has caused an impossible stalemate in the Movellan war. They tensely discuss the idea until Stien's programming takes control again long enough to let Lytton's troops kill Lt. Mercer. The Doctor and Stien escape again — but Stien runs off, refusing to risk the Doctor's life by staying around him. As it turns out, Davros has been reprogramming Daleks and random humans to obey only him, and the regular Daleks don't like this. As he begins his big escape, Davros drops a vial of the anti-Dalek virus to prevent the regular Daleks from killing him off — destroying several Daleks in seconds, making them spout lots of what looks like shaving cream as they die.

Back on Earth, a massive battle is going on between the Daleks and Davros' army. The Doctor, now also back on Earth, figures out that those "unexploded bombs" are really giant capsules holding more samples of the virus. And sets them off, killing all the Daleks off instantly. Lytton escapes and puts on a cop's uniform — wandering off into the sunset, to... somewhere.

Back on the space prison, Davros himself begins to escape until he also begins to spray shaving cream from his wheelchair. He too is vulnerable to the virus, and him screaming that he's not a Dalek doesn't help.

The Dalek Supreme appears on the TARDIS scanner and tells the Doctor that the Daleks have duplicates of prominent humans all over Earth, and it is just a matter of time before Earth falls. The Doctor takes the most sensible course of action possible — he goes to inform the authorities. (Bet that went over well!) Meanwhile, a wounded Stien activates the self-destruct with a heroic dying belly-flop, taking out the remaining Daleks and pretty much tying up the plot in a neat little bow.

The Doctor calls for everyone to come back to the TARDIS. Tegan, though, refuses to come back. She says she's tired of the hectic life of the TARDIS and all the death. She's done, so Tegan runs off. As the TARDIS vanishes, Tegan runs back, remembering the Doctor's old admonishment: "Brave heart, Tegan." She calls out to the empty air that she will miss him.

This was Peter Davison's only TV encounter with the Daleks, and it was specifically brought in so he could have his Dalek story before he left at the end of the season. Davison had requested it for the previous season, but a strike wound up delaying it until season 21... which also left the original Davros (Michael Wisher) unable to reprise his role. This gave us the Third Davros, Terry Molloy, who would remain in the role for the rest of the classic series as well as the audios.

This is Janet Fielding's final televised as Tegan, although her final adventure was actually supposed to be the next serial alongside Turlough. Producer John Nathan-Turner decided that another companion should be introduced to make another cross-Doctor link, thus forcing Tegan out one serial early.

It's also Bloodier and Gorier than any other Doctor Who story up to that point, with an on-screen death count of 64 — not even counting Daleks.