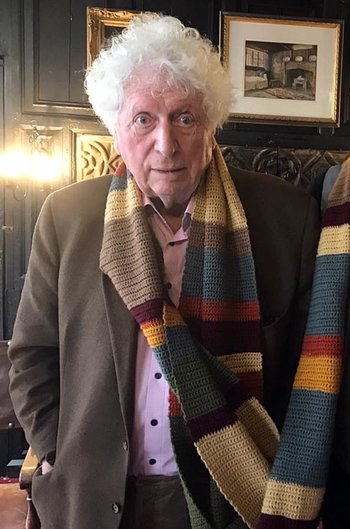 Would you care for a jelly baby?
"I have no regrets about being 'Doctor Who'. It was the greatest thing that ever happened to me."
Advertisement:

An old story goes that if you don't know what Tom Baker looks like, all you need to do is close your eyes and think of the Doctor... and that's him. Curly hair, floppy hat, long multicoloured scarf and toothy grin. Instantly recognisable. Even today, forty years since leaving the role, he's generally accepted as being the best-known of any of the fourteen actors to have played it to date and has only now been surpassed in popularity by David Tennant; even newer and/or younger Whovians, for whom Tennant is their iconic Doctor, list Baker as the Classic Doctor. Certainly he was the longest-serving (seven seasons in total), so he is embedded in the public consciousness better than most of the others.

Born in Liverpool to a merchant seaman father and a devout Catholic mother, Baker studied to become a monk in his youth, but he dropped out upon realising that a life of isolation under the downright abusive conditions of the monastery wasn't for him. He gravitated towards acting, mostly as an understudy with the Royal National Theatre. He gained plaudits for his portrayal of Grigori Rasputin in Nicholas and Alexandra, and this led to several other film and television roles, among them the Evil Sorcerer Koura in The Golden Voyage of Sinbad.

Nevertheless, the forty-year-old actor was working on a London building site as a bricklayer (and, by his own account, was of "no fixed abode") when he got lucky. Very lucky. Being known socially to the head of BBC drama and his wife (no sniggering at the back, please), Baker's name came up in discussion as a possibility when the producers of Doctor Who were looking for somebody to replace the departing Jon Pertwee in 1974. A meeting was arranged between Baker and the two men who were in overall charge of the series, producer Barry Letts and script editor Terrance Dicks, both of whom took an immediate liking to the actor.

At the time of his casting, Baker was by far the least-known actor ever to have played the Doctor. William Hartnell, Patrick Troughton and Pertwee had all been much-loved character actors, even before playing the role, whereas Baker had largely been a supporting artist; this, combined with the immense popularity of Pertwee's portrayal of the Doctor, led to Baker spending much of the early period of his run as a staunchly contested successor, with many criticizing him simply because he wasn't Pertwee. It's somewhat ironic, therefore, that Baker ended up being the longest-serving and best-known Doctor of them all. His portrayal of the Doctor was and remains iconic: Baker himself attributes his success to having played the role as that of a Manchild, similarly to Harpo Marx (of whom Baker continues to be a huge fan) — this characterisation was a contrast to the more august former incarnations and became popular in later ones. To this day, Baker stands as the definitive archetype for the Doctor, with all later portrayals being a direct reaction to what made his take on the role so popular.

In 1981, Baker left Doctor Who, handing over the reins to Peter Davison. Accounts vary on exactly why he left. One popular story is that Baker tendered his resignation to the new producer of the series as a joke, believing that his massive popularity with the public would never see it accepted, only to be surprised when the producer snapped back, "Sure! When do you want to leave?" Commentary in the "New Beginnings" DVD boxed set suggests that John Nathan-Turner, the new first-year producer of the series, wanted to put his own personal stamp on the series and felt Baker had become impossible to rein in. For his part, Baker wasn't fond of the changes Nathan-Turner began making and threatened, as he had done with other producers in the past, to resign if he didn't get his way. Oops. An account from the documentary "A New Body At Last" from the "Logopolis" DVD tends toward a synthesis of both explanations, claiming that Baker's threats to leave had become almost a yearly tradition on the Doctor Who set (the idea being that the producers would acquiesce to Baker's demands as the show was at the height of its popularity) and that Turner, desiring to be free to put his own mark on the franchise, finally called Baker's bluff.

He maintained his Doctor persona off-screen to a large extent, never smoking or drinking in public and being on his best behavior around children. The pressure eventually led to endless in-fighting and even a few live television crack-ups. Later actors testified that the Doctor, not unlike Sherlock Holmes, is a tough character to get inside of; extended time there can take its toll. Along with the risk of typecasting, Baker's example is probably a major consideration in most actors (and, in the case of his successor, the exact stated reason) for leaving the role after three or four years. It doesn't help that like Jeremy Brett, the actor who got Lost in Character playing Sherlock Holmes, Tom Baker suffers from bipolar disorder (which was not diagnosed until well after he left the role).

◊), Redbeard Rum in Blackadder, Sherlock Holmes (in a production so bad that the BBC publicly apologized for it), and an elf druid in the Dungeons & Dragons (2000) movie, as well as the role of Puddleglum in The BBC adaptation of The Silver Chair by C.S. Lewis. He had a regular role as Donald MacDonald in the later seasons of Monarch of the Glen. He has found a niche as a voice actor in recent years (that's him doing the narration in Little Britain, the opening cutscene of Hostile Waters: Antaeus Rising and the Bendu in Season 3 of Star Wars: Rebels), but he will forevermore be remembered as the Doctor.

A good decade after the other actors who played the character, he finally reprised the role in Big Finish Doctor Who, and now speaks fondly of his time as the Doctor. He also appeared at the end of "The Day of the Doctor" as a museum curator, implied to be a future incarnation of the Doctor who willingly regenerated into Baker's form again — making him share the rather unique distinction with David Tennant of having played two distinct incarnations of the Doctor.

He married one of his former Doctor Who co-stars, Lalla Ward (who played companion Romana II), shortly after they both departed the series. The marriage didn't last very long. Neither wishes to elaborate further (though Baker contends that their relationship lasted a whole year, which is rather good if one adopts a long perspective). Its generally thought that each fell in love with the character the other was playing, and not the actor behind the role. They seemed to have patched things up and are on cordial terms now, though, even working together for the audio plays. Lalla Ward has also mentioned, on several occasions, that it really annoys her when people blame Tom for the marriage ending and that it was not because he was abusive and it was not solely his fault.

Note: Tom is no relation to Colin Baker, who later played the Sixth Doctor, or to Bob Baker, who wrote or co-wrote several of his stories.

Tom Baker was exceptionally fond of Elisabeth Sladen. When she died, he cried muchly. He still cries muchly mentioning her, even to this day, in interviews.

Soliloquy on the Beacon

Upon discovering that he's arrived on a stasis ship in the distant future, the Doctor gives an impassioned speech about the vessel's nature as proof of humanity's undefeatable perseverance. Of note is that according to the show's production staff, this monologue was written precisely because Tom Baker's deep, theatrical voice lent well to such soliloquies, the kind that previous Doctors would never have been able to pull off.

Soliloquy on the Beacon

Upon discovering that he's arrived on a stasis ship in the distant future, the Doctor gives an impassioned speech about the vessel's nature as proof of humanity's undefeatable perseverance. Of note is that according to the show's production staff, this monologue was written precisely because Tom Baker's deep, theatrical voice lent well to such soliloquies, the kind that previous Doctors would never have been able to pull off.