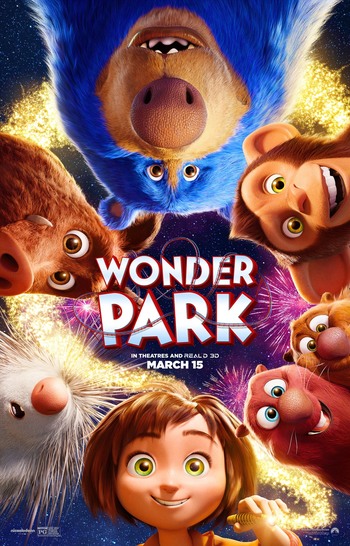 "We are the wonder in Wonderland."
"Boy, it's gonna be a great day!"
— Boomer
Advertisement:

Wonder Park is the fourth film from Paramount Animation and co-produced by Nickelodeon Movies with Spain's Ilion Animation Studios (Planet 51) handling the animation. It was produced and written by Josh Appelbaum and André Nemec, with Kendra Haaland serving as an additional producer. The movie stars Brianna Denski, Ken Hudson Campbell, Kenan Thompsonnote in his return from Nickelodeon after his Kenan & Kel partner Kel Mitchell returned to the channel for Game Shakers, Ken Jeong, Mila Kunis, John Oliver, Matthew Broderick, and Jennifer Garner. The film was released on March 15, 2019.

Cameron "June" Bailey is an optimistic and imaginative young girl who, following her mother becoming deathly ill and sent away for medical treatment, decides to abandon her creative pursuits in favor of keeping a watchful eye on her father. After escaping a bus on the way to summer camp due to paranoia about her dad's health, June stumbles across an abandoned amusement park in the forest that strangely mirrors the miniature one that she used to build with her mom, right down to the talking animals. With the park overrun by a mysterious dark force, June works with her creations brought to life to help return Wonderland back to its former glory, and maybe even recover her love of fantasy.

Notorious for being the first wide-release Hollywood production since 1995's The Pebble and the Penguin not to credit its director, as well as receiving its MPAA a full year before its release date.

Similarly to Jimmy Neutron: Boy Genius and Barnyard, the film serves as the Pilot Movie to a television series

, however, the movie's poor performance means that the series may permanently reside on The Shelf of Movie Languishment.