Film / The Wolf of Wall Street 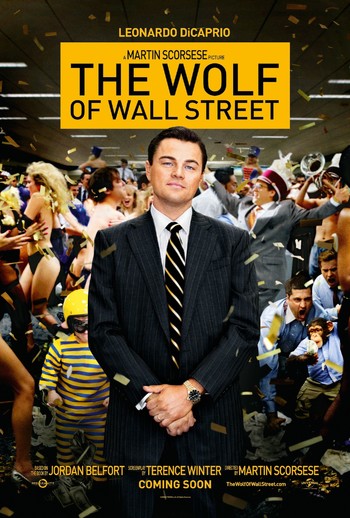 Sex, drugs and penny stocks.
"My name is Jordan Belfort. [...] I'm a former member of the middle-class raised by two accountants in a tiny apartment in Bayside, Queens. The year I turned twenty-six as the head of my own brokerage firm, I made 49 million dollars, which really pissed me off because it was three shy of a million a week."
Advertisement:

A biographical film based on the memoir of the same name by Jordan Belfort and directed by Martin Scorsese. It stars Leonardo DiCaprio, Margot Robbie, Jonah Hill, Matthew McConaughey, Jean Dujardin, Jon Favreau and Rob Reiner, among others.

A New York stockbroker recounts to the audience how he made his fortune through shady (and outright illegal) stock manipulations, and the hedonistic drug/sex-fueled lifestyle he built with that fortune. His downfall begins when he is investigated by the SEC and FBI, but he refuses to leave the life he has built.

The movie was released on December 25, 2013. The trailer can be found here.

Not to be confused with Wall Street.

The Wolf of Wall Street

"Mad" Max Belfort puts on an English accent to a caller.

The Wolf of Wall Street

"Mad" Max Belfort puts on an English accent to a caller.