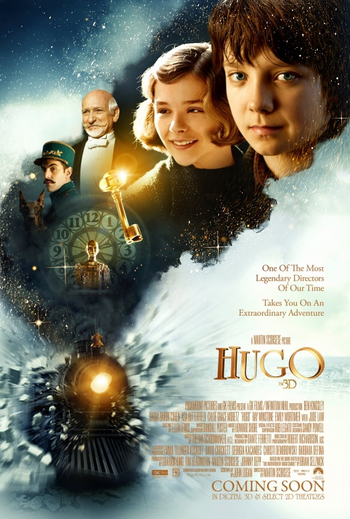 "If you've ever wondered where your dreams come from, you look around... this is where they're made."
— Georges Méliès
Advertisement:

Hugo is a 2011 adventure film directed by Martin Scorsese, written by John Logan and co-produced by Johnny Depp. Based on Brian Selznick's Caldecott Medal-winning children's novel The Invention Of Hugo Cabret, the film stars Asa Butterfield, Chloë Grace Moretz, and Ben Kingsley, with Sacha Baron Cohen, Christopher Lee, Jude Law, Helen McCrory, Ray Winstone and Michael Stuhlbarg in supporting roles. The film is notable for being Scorsese's first family-oriented film as well as his first shot in 3D, and is considered the director's love letter to silent cinema.

The film centers on Hugo Cabret (Butterfield), an orphan boy who lives in a train station in 1930s Paris and whose only companion is an automaton discovered by his late father. He devotes his life to making sure the clocks run on time and to gradually repairing the automaton, under the belief that the message it is designed to write is a message from his father.

Selznick also wrote a companion book to the film, The Hugo Movie Companion, about how his novel was adapted to the screen.

Not to be confused with the Hugo video game series.