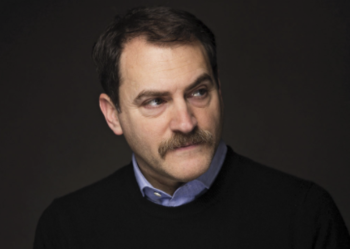 Michael Stuhlbarg (born July 5, 1968 in Long Beach, California) is an American film and theatre actor. Stuhlbarg has built up a resume of supporting roles by critically acclaimed directors from Steven Spielberg (Lincoln) to Martin Scorsese (Hugo) to Woody Allen (Blue Jasmine). In 2017 alone, he took on supporting roles in three films nominated by the Academy for Best Picture (The Shape of Water, Call Me by Your Name and The Post), and received acclaim for his performances (particularly Call Me By Your Name) in the form of critics' choice nominations. He's also been up for TV and theatre awards for roles such as Richard Clarke in The Looming Tower and Michal in The Pillowman, respectively.

He's perhaps best known for starring in the Coen brothers' dark-comedy A Serious Man in 2009, but with his diversity and sheer number of roles, it would be easily to recognize his face from practically anything.

Works that Stuhlbarg has acted in: