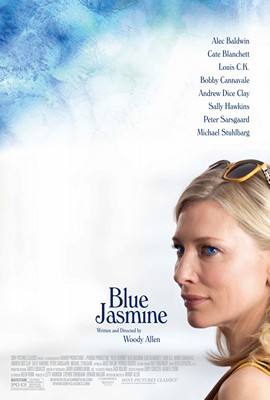 A 2013 film written and directed by Woody Allen. It stars Cate Blanchett and Alec Baldwin. It takes a lot of influence from A Streetcar Named Desire and the "serious" portion of Melinda and Melinda, as well as the real-life shenanigans of Bernie Madoff and his family

Jasmine, a formerly wealthy widow from New York, moves to San Francisco to live with her stepsister Ginger. She claims it's merely a temporary stay until she can get back on her feet, but it quickly becomes clear that her rich background has hampered her ability to function in middle-class society. She additionally has made a lot of enemies, from her husband's dishonest swindling to make himself rich. Rumors of a troubled past surround her, which gradually begin to choke off her attempts for a new life.