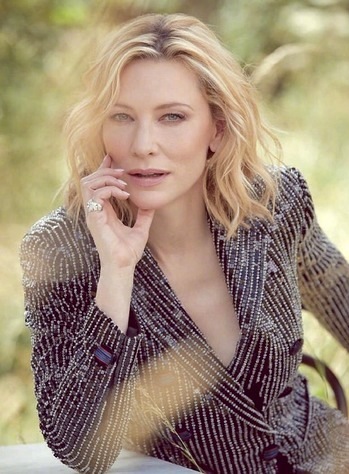 A whole nation would go gay for her.

◊
"Do I think Cate Blanchett is the most spectacular creature that ever walked the planet? Yes, I do."
— Russell Crowe
Advertisement:

Catherine Élise "Cate" Blanchett, AC (born 14 May 1969 in Melbourne) is an award-winning Australian-Americannote Her father was from Texas so she holds dual citizenship but was raised in Australia screen and stage actor, producer and theatre director who burst onto the international stage in 1998 in an Oscar-nominated performance as Queen Elizabeth I in Elizabeth.

Prominent roles of hers since then include the Elven queen Galadriel in Peter Jackson's The Lord of the Rings and The Hobbit film trilogies, an interpretation of Bob Dylan in I'm Not There, Daisy in The Curious Case of Benjamin Button, Katharine Hepburn in The Aviator opposite Leonardo DiCaprio (for which she won her first Academy Award for Best Supporting Actress, making her the only actor in history to win an Oscar for playing another real-life Oscar winner), Sheba Hart in Notes on a Scandal with Judi Dench, the completely awesome Lady Marion Loxley in Ridley Scott's Robin Hood, Colonel-Doctor Irina Spalko in Indiana Jones and the Kingdom of the Crystal Skull, Lady Tremaine in the live-action remake of Cinderella, and Jasmine Francis in Blue Jasmine, for which she won her second Academy Award, this time for Best Actress. She also portrayed Hela, the first major female supervillain in the Marvel Cinematic Universe, in Thor: Ragnarok.

She is mostly well known for her hugely charismatic screen presence, smoky and alluring voice, sharp cheekbones and generally queenly, ethereal nature, as well as her considerable acting talent and ability with accents. The incomparable Meryl Streep has listed her as one of her favorite working actors, and she has been heralded multiple times as "the greatest actress of her generation"note even though Blanchett herself has stated

that she would rather be referred to as an actor than an actress.

She's been married to Australian director/playwright/screenwriter Andrew Upton since 1997, and they have four children.

ALL SHALL LOVE HER AND DESPAIR!!