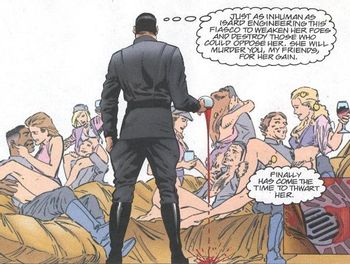 A character who joins either the protagonists or antagonists not so much because he agrees with all their ideas but because he can no longer tolerate the opinions or actions of his old group. This is usually because their methods are too extreme, ineffectual, or illogical.

Another major example is when the qualities he admired in his allies are lost by them. Proud Warrior Race Guys sometimes defect if they feel their race talks a good talk but have become hypocritical cowardly jerks. So My Species Doth Protest Too Much, and even if they don't, the character Doth Protest Too Much. (Expect him to invoke the Good Old Ways as a defense for his own behavior. Sometimes attacked by others from his society on the grounds that Good Is Old-Fashioned.)

Sometimes this character is the Rebellious Princess if this trope is the reason the princess ran away. May also be the Black Sheep or White Sheep. If the character is defecting from the antagonists (or at least from a group whose goals or methods are less than admirable), perhaps because they are a Guilt-Ridden Accomplice, expect the former cronies to become All of the Other Reindeer. Compare Rebellious Rebel, Resign in Protest. Beware that one is not Rewarded as a Traitor Deserves with a Heel–Face Door-Slam, though. Particularly likely to happen if a character finds out that they were The Only Believer in whatever cause or system has become so decadent and corrupt. See also Evil Virtues and Mr. Vice Guy. Compare Rage Within the Machine and Cult Defector.