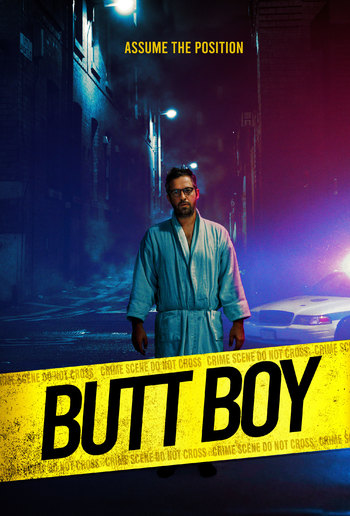 Assume the position.
Chief Lazzara: So you're asking me to go off this theory you got about a white married male, who happens to be a father, living in the suburbs of Kritika County, who also happens to be your AA sponsor, which I might add has been secretly running around cramming objects, animals, and children up his asshole, then he somehow digests them, and he does this in sprees almost in serial killer fashion. Is that about it?
Advertisement:
Detective Fox: ...Uh-huh.

Stop us if you've heard this one.

Chip Gutchel is an ordinary office worker in Kritika County, Florida, who feels unfulfilled by his job and put-upon by his wife. This changes when he undergoes a routine rectal exam and realizes that he likes the sensation of his butthole being penetrated. So Chip soon starts shoving increasingly large objects up his ass. First it's common household items. Then it's small animals. And finally, Chip's impulses are so uncontrollable that eventually he puts a baby up in there.

Butt Boy is a 2019 indie horror-comedy written and directed by Tyler Cornack, starring himself as the Villain Protagonist Chip and Tyler Rice as Russel B. Fox, the hard-nosed Cowboy Cop out to take him down.