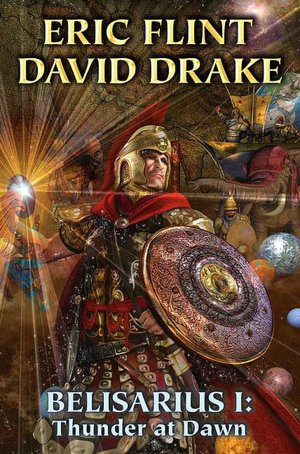 "All warfare is based on deception."
— The Art of War
Advertisement:

The Belisarius Series is an epic Alternate History saga written by David Drake and Eric Flint.

Consists of the books:

The story follows the exploits and careers of the great Byzantine general, Flavius Belisarius; except there is one minor difference from Real Life history. A war in The Future between two posthuman and transhuman factions has spilled into the past as both groups are attempting to alter history to establish a future more to their liking. On one side, you have the 'New Gods,' who are obsessed with genetic purity of the human race. They have sent a cyborg called Link (no relation) to aid the Malwa Empire in India in achieving global dominance and instituting the eugenics program to shape the future humanity more to their liking.

Link's primary target is the Eastern Roman Empire and its belief in meritorious accomplishment. Their opponents, the Great Ones, send a crystalline AI called Aide to advise the Roman general Belisarius and provide him the technology to defeat the Malwa.

Is the Spiritual Successor to The General Series, also co-created by Drake. Nothing to do with Donald P. Bellisario.

The Series Provides Examples of the Following Tropes:

''He had often been called the most hated man in the Roman Empire. Few had doubted that claim, in the past. None doubted it now.