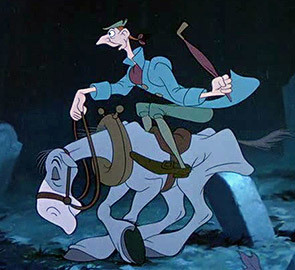 With that attitude, it's a wonder Ichabod didn't get beheaded sooner.
Princess Fiona: I have to be rescued by my true love. Not by some ogre, and... and his pet!
Donkey: Well, so much for "noble steed"!
— Shrek
Advertisement:

There is the Cool Horse... and then there's this, the four-legged equivalent of The Alleged Car, a broken-down nag destined for the knacker's yard or the glue factory — or it would be, if it hadn't somehow wound up in the hero's possession.

Any member of the genus Equus can qualify.

If the animal's appearance turns out to be deceptive and it's unusually strong or fast, or Took a Level in Badass, then it may be a stealth Cool Horse.

Could perhaps make more sense being retained than the inanimate related tropes, given that the steed is alive, so disposing of it would be unheroic and they're more conducive to becoming attached to.

May overlap with Moody Mount. See Horsing Around for healthy horses with attitude problems. Compare with The Alleged Car, The Alleged Computer, and The Alleged House for other items of dubious quality. Delicate and Sickly is the human equivalent, especially when it comes to young females.