Did You Just Scam Cthulhu? 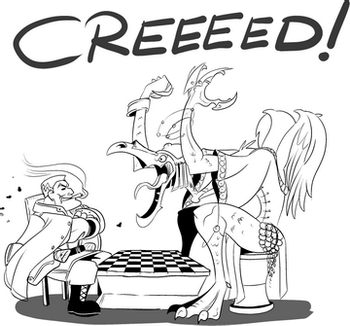 I have existed before the stars, and I will exist long after they have died! No mere mortal could possibly—what is that pawn doing there?
"Even devils should beware when bargaining with Thanos of Titan."
— Thanos, The Infinity Crusade
Advertisement:

A scheme concocted by the resident chessmaster or manipulative bastard ends up involving the manipulation of a supernatural entity. Such a plan may include the deity from the outset, or the deity may be integrated into the plan along the way. Yet despite being up against a deity, the mortal somehow pulls it off, making a fool out of something vastly more powerful than themselves.

Contrast Evil Is Not a Toy when someone attempts to either invoke this trope or make a Deal with the Devil, but fails.

See also Wishplosion, which is specifically for outfoxing wish-granting entities.