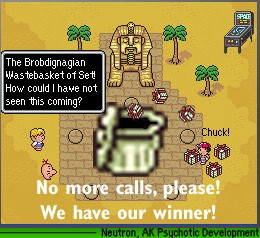 Your mind is officially nuked.
"WARNING: By reading this comic, you legally join Ness and the others in a lengthuous hunt for fortune. You will be required by law to see Mr. T throw people, Battles between giant objects, and things that float gracefully over the comic, begging to be defined but cannot be explained. Disaster labs cannot be held responsible for any injury or fatality involving photons emanating from this comic. Do not read while operating heavy machinery. Do not read while watching Alf. If accidentally ingested, consult god."
Advertisement:

Mind-flayingly bizarre Sprite Comic barely based on EarthBound. After stealing Giygas's $44,000,000 retirement fund, Pokey reunites with Ness and uses the funds to hunt for treasure. At least, that's how it starts out. What follows is a barely coherent acid trip of an adventure, as Ness, Pokey, Jeff and Mr. T battle monkeys, Mr. B Natural, soul-stealing photographers, the Eagleland education system and pretty much everything they meet.

Chicanery can used be found at (the now defunct) Disaster Labs, but much of the series is still available on Comic Genesis