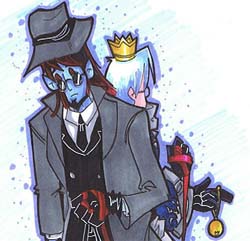 "Save the world, then rule it..."
Advertisement:

Chess Piece is a Danny Phantom Fan Webcomic AU, made by Neo Yi. Taking place during the The Roaring '20s, it stars Prince Daniel Masters, heir to the Water Kingdom of Dalv. After the events of the Great War, his father, the King Vlad has tried to preserve peace and alliance with the other nations.

Unfortunately that's interrupted by the aptly named Chaos Order who are on the search for the Seven Crystals that hold untold powers to those who utilize it. Along for the ride is Phantom, a mysterious denizen who wants Vlad for himself (whom he deems his "papa") by creating a world of Nothingness. Naturally, Danny can't have that. After all, if the world is destroyed, then how can he rule it?

The comic launched on 3/11/06, but was canceled on its fifteenth issue out of a planned thirty or so. It was halfway done. The comic has since been deleted, but the first 5 issues can still be downloaded here.