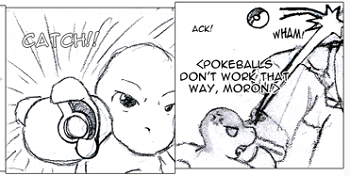 is a webcomic drawn by Kyrio, set within the Pokémon world.

It follows the misadventures of Cole Nero. Though the son of the local Pokémon professor, he was actually never that interested in becoming a Trainer. But on his 18th birthday, he finds himself dragged along on a Pokémon journey anyways- on the other side of the Pokéball.

An encounter with a badly-programmed reconstructor/teleporter leaves him stranded in the woods as a Charmander. Confused, he accidentally lets himself be caught by neophyte trainer Brian Wheaton, who makes up in enthusiasm what he lacks in competence.

Unable to communicate his predicament to the human world for the time being, he reluctantly goes along with Brian- and soon begins to fear just how naturally he takes to battling. Then a 2000-year-old psychopathic Mew gets wind of his situation, and things start getting complicated...