The Exit Is That Way 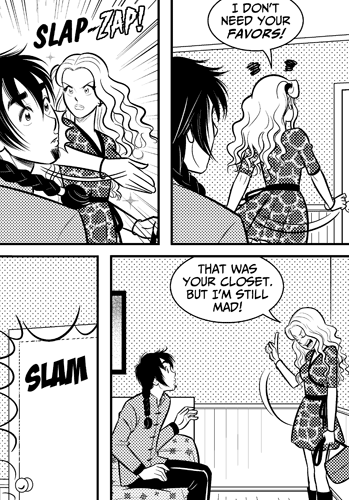 "That would have been a very dramatic exit, if only her room was down that hall."
— Dr. Frasier Crane, Frasier
Advertisement:

Alice and Bob have an argument, usually with Alice questioning Bob's planning or general capability.

Either way, Bob acts indignant and shocked, insists he knows exactly what he's doing and storms off.

After a brief pause, Alice politely points out that Bob is going the wrong way. Bob makes an embarrassed excuse and sheepishly wanders out in the right direction.

Common variations include Alice not saying anything, but seeing Bob go one way, then hurriedly switching to the opposite direction, or Bob entering a closet (bonus points if Bob stays in there a while out of embarrassment).

Similar scenes can be used to show that a character is particularly flustered or worried, or that a character is an infiltrator that doesn't know his way around. As a variant, Bob may have just expressed sudden resolve and set off to do some dramatic, plot-important event, but his conviction turns into comic effect by his mistake in direction.

See also Your Other Left, House Amnesia, Door Focus, Crossing the Burnt Bridge. Often used as a tool of providing a Failed Attempt at Drama.