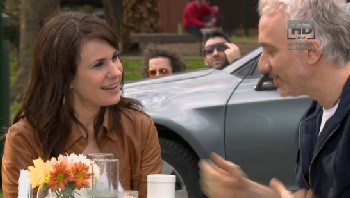 "And now that there's nobody around, I have to tell you a secret."
"Common rooms have unusual acoustics. Conversations about Voldemort or death eaters are always overheard."
— The Tough Guide to Harry Potter fanfiction
Advertisement:

In fiction, it doesn't matter how quietly you speak, people in the other room can still hear you. For example, if Alice and Bob are in the kitchen discussing plans for Aerith's birthday gift, with hushed voices, then Aerith, who's living in the apartment across the hall will mention she doesn't want the gift they were talking about.

In most cases, there is an ongoing secret that is central to the character or the plot, and the hero or villain is talking freely about it with the Secret-Keeper or the one who Cannot Spit It Out. Unknown to them, someone else got near and overheard it. The time for The Reveal has come! Don't forget to tune in next episode, same hour, same TV channel! And, in the next episode, everything is solved with a contrived explanation. "Yes, I said that I would kill Storm, but I was not talking about the X-woman, I was just talking about the weather.".

Another possible outcome is that the character actually heard the hidden truth, but comically missed the point and understood it all wrong. For example, The Ditz overhears a communist conspiracy, where someone points out that when their Evil Plan is ready, the Party will find anyone. But instead of realizing the threat, she understands that they are fun guys, with a project so that anyone will find a party. Of course, the evil ones will be worried when they realize that she heard them, and breathe easy when they hear the misunderstanding, and try to maintain the ditz in the misunderstanding (for example, hosting a party or two, so that the thing stays credible).

It is possible as well that the character heard well, understood what he heard and the significance of it, but can't or won't take a megaphone and tell everyone. Perhaps the secret holder has a way to force him into secrecy, such as blackmail. Perhaps the character will put a price on his silence. Perhaps the secret sounds so unlikely that even if he talked nobody would believe him, not without a Smoking Gun. Perhaps he just doesn't care. Or perhaps he was Killed to Uphold the Masquerade. In any case, it's bad news: the more people that know the secret (even if they don't reveal it), the more likely that it will become an Open Secret and reach ears it's not supposed to. Even death is not enough: unless it was a Faceless Goon, if a character is killed someone will investigate who killed him and why. And that leads to even more people lurking around the secret!

This trope is a Necessary Weasel in Telenovelas. As most of the ongoing subplots involve secrecy at some level, this trope is constantly used for drama, and to keep things going on.

Not to be confused with Stage Whisper, which is about conversations being easily heard only by the audience. See also Exact Eavesdropping. Compare and contrast Out-of-Context Eavesdropping.