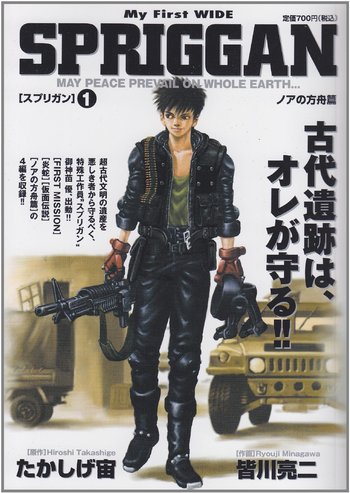 May peace prevail on [the] whole Earth.
Advertisement:

Ancient artifacts that predate mankind have been uncovered in locations all around the world near the end of the Cold War. These artifacts are made from materials previously unknown to modern humans and were clearly designed by a civilization far more technologically advanced than our own. An organization called ARCAM has been formed to study these sites and uncover the true nature of what lies within them. One of the messages inscribed in a message plate mentioned that if one of their inventions cannot be used for good, then it should be destroyed at all costs. A unit of elite agents trained to protect the ARCAM scientists and the artifacts, known as Out-of-Place Artifacts ("OOPArts"), are known as "Spriggan".

One such Spriggan is a 16-year-old Japanese high school student by the name of Yu Ominae. He began his ARCAM Spriggan duty after an old friend of his was being hunted down by the Soviet and American militaries in the hope of using an OOPArt located in the Mt. Fuji region of Japan known as the Orb, an artifact that can control flaming snakes from the volcanic depths of the Earth. As he and the other Spriggans battle things out with militaries, criminals and mercenaries to prevent OOPArts from being secured as military weapons, something is brewing from within the ranks of the ARCAM Corporation that will ultimately determine the fate of the entire world.

An anime film was directed by Hirotsugu Kawasaki and produced by Studio 4°C, adapting the Noah's Ark chapter with the same title written by Hiroshi Takashige. The film was originally released in Japan by Toho, and later received a North American release in 2002 by ADV Films.

As for the manga, the original 11 volume series was complete with another 8 done in bunkoban, twice. However, it didn't finish its serialization in North America, France, Malaysia, and Spain. It did complete serialization in Indonesia, Germany, Hong Kong, Singapore, Taiwan, and Thailand. As of 2022, Seven Seas Entertainment obtained the rights to publish the manga in English.

A video game adaptation was released by FromSoftware for the Playstation. In it, players take the role of a Japanese Spriggan agent named Tashiki Oshiki with appearances by Yu, Jean, and Oboro.

It was announced that the manga will be adapted again

on March 2019 with animation by David Production in collaboration with Netflix. It’s due to be released worldwide by 2021. However, the anime is delayed to 2022.