Spoilers for all preceding Sakura Wars works, as well as this one, will be left unmarked. You Have Been Warned! 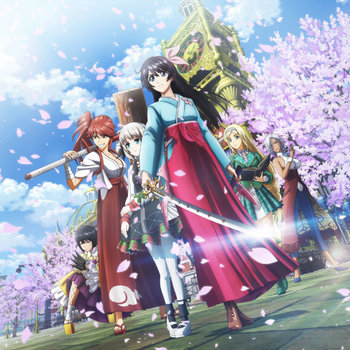 Sakura Wars the Animation, known in Japan as Shin Sakura Taisen the Animation, is a CGI anime sequel to the 2019 Sega video game Sakura Wars, directed by Manabu Ono (The Asterisk War, The Irregular at Magic High School, Dragonaut: The Resonance). Series composition credits are shared by Ono and Tatsuhiko Urahata (Strike Witches, Gate, Horizon in the Middle of Nowhere) and Sakura Wars veteran Kohei Tanaka once again wrote the music. The series was produced by Sanzigen Animation Studio, which produced the cinematics to the 2019 game. It is the first Sakura Wars TV series in 20 years and the first to be dubbed by Funimation since their release of École de Paris in 2005.

Set in 1941, one year after the events of Sakura Wars, peace has returned to Tokyo at last. Seijuro Kamiyama (Yohei Azakami), a naval Ensign and the captain of the Imperial Combat Revue's Flower Division, is transferred to Europe and Sakura Amamiya (Ayane Sakura) assumes leadership in his place. Kamiyama eventually returns to Japan, accompanied by Klara M. Ruzhkova (Misaki Watada), who is the apparent Sole Survivor of the first Moscow Combat Revue. Meanwhile, the team is approached by Valery Kaminski (Kenji Akabane) and Klara's older sister Leyla Ruzhkova (Haruka Shiraishi), two Moscow Combat Revue members who seek out Klara to have her rejoin the team. The Imperial Combat Revue must protect Tokyo once again and learn what the Moscow Combat Revue's real motives are.

The series premiered on April 3, 2020 as part of the Ultra Super Anime Time block on Tokyo MX and BS11, and it consists of 12 episodes. Outside of Japan, Funimation premiered it same-day in North America and the United Kingdom. Madman Entertainment streamed it on the AnimeLab service in Australia and New Zealand, while Aniplex made it available via country-specific Wakanim services in Europe.