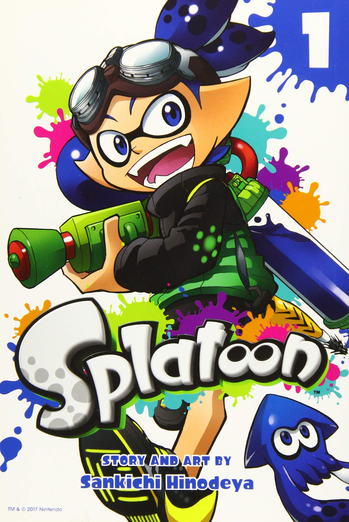 Splatoon is a Gag Series manga serialized in CoroCoro Comic, written and drawn by Sankichi Hinodeya, and based on the Nintendo video game franchise of the same name. While it does briefly adapt some of the various single-player campaigns, the manga puts the bulk of its attention on the main multiplayer modes.

The manga stars four Inklings named Goggles, Headphones, Specs and Bobble Hat. This quartet forms Blue Team, and each chapter follows their antics as they partake in various tournaments and slowly rise through the ranks of Turf War and (eventually) Ranked Battle, both in spite and because of their dysfunctional dynamic.

Beginning as a promotional one-shot released prior to the game's release in May 2015, the manga would continue later that December, before gaining a regular monthly schedule in February 2016. Viz Media would start localizing the manga in English in December 2017. The series also had a two-episode motion comic adaptation featuring the voices of Mikako Komatsu, Kondo Rena, and Haruka Shiraishi, which released in August 2017.

From December 2021 to August 2022, the manga went on hiatus. It retruned in Sptember 2022 with the serialization Splatoon: Bankara!, based on content from Splatoon 3.