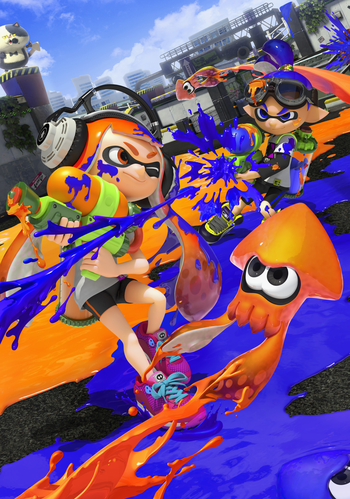 Splatoon is a Third-Person Shooter created by Nintendo for their Wii U system. Revealed at E3 2014 and released in May of 2015, the game features the Inklings, a race of shapeshifting squid-kids/people who fight with all sorts of ink weaponry, which allows them to paint entire areas of their color that they can use to swim around the map faster as a squid. Upon announcement, the game was notable for being the first new major IP developed by Nintendo that wasn't oriented strictly for the casual market since Pikmin fourteen years prior.

The game's main focus, and what it was originally conceived as, is online Competitive Multiplayer. Two teams of four Inklings are put on a map and armed with various kinds of ink weaponry. Although "splatting" the enemy can help gain an advantage, doing only that will not win the game. In Regular Battles, or Turf War, the point is fighting over control of the map by spraying colored ink all over it. The team that covers the most wins. Ranked Battles, on the other hand, focus on completing more specific objectives, such as taking control of specific areas of the map by inking them, riding a tower all the way to the enemy base, or carrying a powerful weapon to the enemy base.

The single player campaign, also called "Hero Mode", is the second focus of the game. In Hero Mode, a lone Inkling guided by the old Cap'n Cuttlefish must fight against the Octarians, an army of octopi from Beneath the Earth who have stolen the Inklings' energy source and plan to invade Inkopolis.

In addition, there's also a local two-player mode, the Battle Dojo, where one player watches the Gamepad while the second uses the television screen; the objective is to pop as many balloons as possible (and prevent the other from doing the same) before time runs out. The game is also compatible with Splatoon amiibo; they can be used to unlock additional challenges in the single-player mode, and completing them rewards the player with additional clothing accessories and minigames.

, which reveals information in a similar vein as the "Pic of the Day" done for Super Smash Bros. for Nintendo 3DS and Wii U. See the announcement trailer here

, and the Hero Mode trailer here.